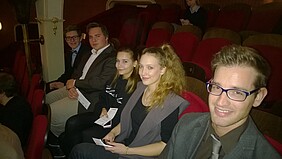 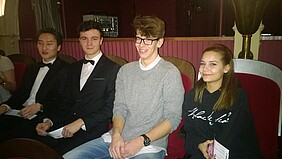 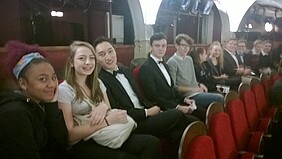 On Thursday, the 14th of January, the students of 7B class of BRG Pichelmayergasse had the chance to watch an evening performance of Yael Ronen’s play Lost and Found at the Volkstheater in Vienna. The play is set in today’s Vienna. It is the story of an immigrant family that is forced to face their stereotypical and hypocritical approach on their lives in dealing with the family’s father’s death. The title is an allusion to the fact that in the course of change people always lose, but also find something. Here are some of the students’ comments after having seen the play:

I was surprised to see that the topic of helping refugees was treated in a non-provocative, humorous way. The tongue-in-cheek approach on people and their prejudices against foreigners is hilarious. The play is a must-see of this season.

I expected a serious drama. Instead, I enjoyed an evening full of entertainment and amusement at the actors’ depiction of the current sad situation about the refugees in Austria.

During the actual performance of the play I had to laugh a lot about the funny dialogues. However, I found out later that most of the statements made were disturbing and asking me to have second thoughts on them. It is a thought-provoking play with a deeper meaning; if you care to understand it…